A Year Down the Rabbit Hole.

Twitter has created a whole new realm for me. I have a writing community to fall back on now - Scriptchat whut?! - They encourage me, challenge me, keep me accountable, and make sure I'm alive when I work so many double shifts in a week that my web presence goes from 120 to 2 in t-minus ten seconds. I have access to insights from people working in the dream spots, like Jane Espenson, John August, Diablo Cody. Sometimes one of them will even throw you a digital bone and drop in on a Scriptchat evening, or maybe someday join all us crazy Canucks (and non-Canuck friends) when we have a GLUSH party for an awards show.

Twitter has won me one of my closest writing friendships thus far, and given me an easy way to contact people I respect, locally, without being invasive. It's also won me two free reads, and a whole lot of blog traffic. Twitter has opened the door to a whole new way to network. It's a pre-introduction, if you will, to the people I am not near and dear enough to, to meet in person. I may only be a name and an avatar for the moment, but when I walk into that writer bar in Toronto, or into screenwriter karaoke in LA, buy a pitcher and say "Hi, I'm Rachel Langer" I KNOW that a few people will know at least a part of who I am.

Derek and I recently went to a gala for a short film competition that we didn't quite get into. The films were great, and the evening was awesome. My networking skills on the other hand? RUSTY. I almost wished I could communicate with everyone in the room via my iPhone. I know that's a little overboard, but I really had to work to remember the codes of conduct that sometimes I forget exist in "the biz". Fortunately I had some great people looking out for me, and we muddled through.

...of what I am trying to say is just this. Twitter (and social media in general) is an invaluable tool. As a newbie or an experienced writer, you have access to so much that just isn't available without wifi. It can open doors, windows, and occasionally knock down a full on brick wall. It is yet another stairway to the infamous doorway "in" to the business. What it isn't? A substitute for real life. It cannot teach you how to interact in person, and don't be fooled, there will ALWAYS be that kind of interaction as a writer. Twitter cannot make your life happen, it can only facilitate your skill set in a different way. Allow social media to be another gateway to connecting with writers, friends, and finding your voice. One entrance to the Stargate, if you will. Just don't forget your map back to YOUR reality. The tangible life where you eat sleep and drink. The tangible and the digital you are only parts of a whole. The two pair just like a cab sauv and porterhouse steak. DELICIOUS. I wonder what will come next to be the cheesecake?
Posted by RL at 10:34 PM No comments: 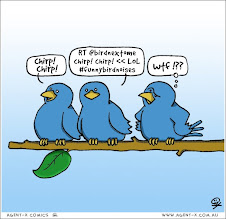